The circular economy, a necessary transition

The limits of linear economy

We live on credit. Each year, humanity exhausts all the resources that the earth provides in one year. For the year 2020, the Earth Overshoot Day arrived on August 22, according to the NGO Global Footprint Network (which is based on 3 million statistical data from 200 countries). The earth overshoot day is it is the date from which the ecological footprint is greater than the earth’s biocapacity ((Ability of ecosystems to regenerate and absorb human waste)

Currently, our economic model is based on the limitless use of our natural resources, although they are exhaustible. Called linear economy, this model traces the life cycle of a product until its destruction.

At the end of life, the product becomes a waste when it will have benefited most of the time from only one use. Our mode of production and consumption is not without consequences for our environment. For example, according to ADEME, France has produced 4.6 tonnes of waste per capita, 65% of which has been recycled, 29% disposed of and 6% recovered energy. Recycling waste saves natural resources and avoids CO2 emissions from the extraction of our natural resources.

The circular economy in contrast to the linear economy is part of the sustainability of products and reintroduces recycled or remanufactured products into the production cycle. This model changes paradigm, waste is thus recovered. In other words, the era of disposables is over.

The French government is encouraging the move towards the circular economy with the creation of the energy transition law for green growth. This law is based on 5 major axes:

«The transition to a circular economy aims to go beyond the linear economic model of extracting, manufacturing, consuming and disposing by calling for a sober and responsible consumption of natural resources and primary raw materials as well as, in order of priority, to the prevention of waste generation, in particular by the reuse of products, and following the hierarchy of waste treatment methods, to reuse, recycling or, failing that, waste recovery».

This transition to the circular economy is intended to be virtuous for the environment, the economy, employment and innovation. 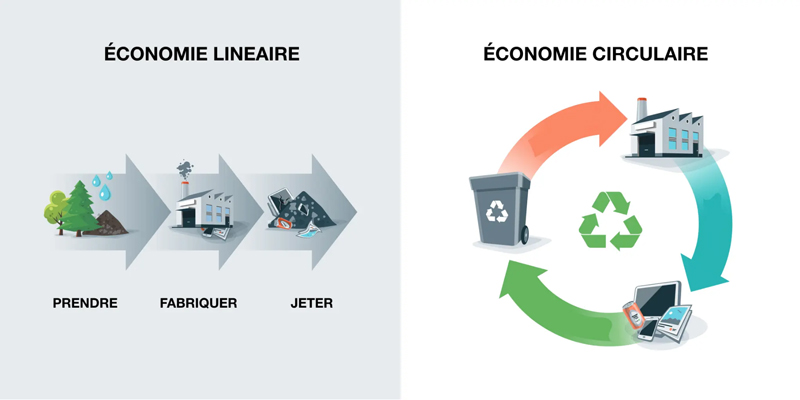 The reuse before recycling

Exatec Group goes even further by promoting the re-use rather than recycling of banking machines and their spare parts.

Recycling means destroying the product that will be partially transformed into a new raw material for use in the production of a completely different product.

Reuse, on the other hand, means giving a second life, a second chance to the product, often after reconditioning, renovation, refabrication of the product to be reused again (same use).

Exatec Group refurbishes hundreds of banking machines each year, either as complete machines or as spare parts. And it’s been 20 years since Exatec Group buys ATMs from banks wishing to renew their fleet of ATMs to learn more: consultez notre rubrique sur les rachats d’automates

Refurbished made in Exatec Group, a guarantee of quality

Each refurbished ATM passes automatically through all the intermediate stages of refabrication and quality testing. Exatec Group has high-tech equipment and a team of high-performance professionals to ensure the highest quality of refabrication. To ensure the quality of its services, Exatec Group has implemented in-house rigorous quality controls following a precise specification. The company has a “local test” dedicated to the validation of parts.

All refurbished parts are checked and validated before shipment. The SME aims for a satisfaction rate above 95% and provides its customers with a guarantee ranging from 6 months to 5 years.

Reuse is a win-win system that benefits both the environment, the suppliers who earn a certain amount of money from it, and the customers who benefit from a better value for money. In addition, many countries have already adopted regulations pushing for more re-use in both tenders and maintenance.